One of the regular themes of the ‘Putin is doomed’ crowd is the idea that while older Russians are deeply conservative, undemocratically-minded, and deeply traumatized by their Soviet upbringing, Russian youth, brought up entirely in the post-Soviet era, are of a much more liberal inclination, deeply dissatisfied with their lot and the governing system, and thus likely to sweep away the current order as soon as they grow a little older. This isn’t based on very much other than the fact that those who attend anti-government protests in Moscow contain a large number of young people. But, as I’ve pointed out before, sociological surveys don’t provide much ammunition to support the idea of Russian youth as revolutionaries in waiting – quite the opposite, in fact. So, it’s interesting to see the results of a new survey of young Russians by the German research foundation Friedrich-Ebert-Stiftung, with help from the Moscow-based Levada Centre.

The research polled 1,500 people aged 14 to 29 across Russia, and also involved focus groups. These were some of the points which emerged that I found interesting:

When asked which values were most important to them, 76% said human rights, as shown below. Similarly, another chart later in the report shows 80% of respondents saying that ‘securing rights and freedoms’ should be a priority for the national government, with lower numbers for improving the economy, reducing unemployment, providing social security, and so on (with bottom place going to ‘development of private entrepreneurship’, suggesting a lack of economic liberalism). This somewhat surprised me as previous polls that I had seen suggest that Russians of all ages are more concerned with social and economic issues than with human rights. 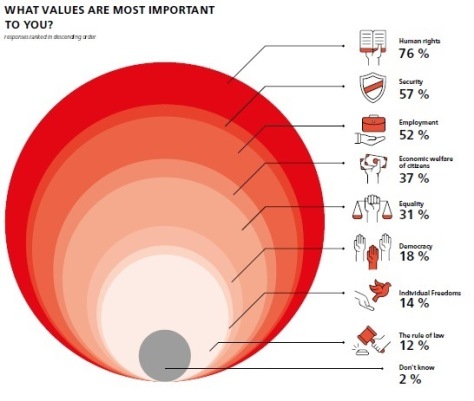 Much, though, depends on how rights are understood, and once you dig a bit deeper things become a bit more complicated, as shown by the next diagram:

According to this, ‘the right to life, liberty, and personal security’, comes top, gaining 78% support. But lower down the chart, you see that ‘security of person and home’ is rated highly only by 57%, and ‘the right to be free from any violence, tyranny and oppression’ by only 45%, which makes me wonder what the 78% mean by ‘right to life, liberty, and personal security’. It would appear that political repression isn’t ruled out by this. In general, in the chart above, what one might call ‘classical’ civil and political liberties don’t do desperately well – only 58% for ‘freedom of speech’; 50% for the ‘right to own property’; 40% – ‘freedom of conscience and religion’; 28% – ‘freedom of assembly and association’, and so on. By contrast, 70% want a ‘right to medical care’, 62% a ‘right to social security’, and 58% the ‘right to work’. As the report notes:

In this respect, Russian citizens differ significantly from people living in established democratic societies, who more often select the right to own property, freedom of speech, freedom of conscience and religion, and so on.

It is possible that to some degree this reflects a lingering Soviet influence, given the priority the Soviets gave to social and economic rights over civil and political rights. It may also reflect the economic difficulties that Russians have experienced in the past 30 years, which makes social and economic benefits more important than civil and political ones. And finally, it may reflect another fact brought out in this report, namely young peoples’ lack of interest in politics. Rating their interest in politics from 1 (low) to 5 (high), only 19% rated themselves 4 or 5, compared with 57% who were 1 or 2. Insofar as it’s possible to position them politically, it strikes me that the attitudes above (generally in favour of liberty, but more concerned with social and economic matters) make young Russians sound kind of social-democratic in orientation. And sure enough, that is borne out in the next chart, which shows their declared political views (young people on the left, the general population as a whole on the right):

What this shows is that politically speaking, young Russians aren’t very far removed from older ones, with social democrats being the largest grouping. Where youth differ is that there are fewer ‘proponents of a firm-hand approach (6% of youth, compared with 15% of the total population), but more ‘nationalists’ (16% as opposed to 10%) and liberals (12% as opposed to 7%). I suppose that to some degree this does justify the claim that young people are more liberal than older ones, but only marginally, while that claim  ignores the fact that they are also more nationalistic.

This is reflected in the fact most respondents said that they were proud to be Russian, while only 14% felt that the collapse of the Soviet Union was a good thing. Around 50% agree with the statement that, ‘Real Russians are only those who have Russian blood in their veins’, and there is a large majority which believes that Russia should not accept more immigrants or refugees. Around 15% expressed a desire to emigrate (a much smaller number than has been pushed around in some earlier reports). The primary reason cited for emigration is the possibility of earning more money in the West. This suggests that the West still has some appeal for young Russians. However, the younger generation doesn’t feel Western, as can be seen by responses to the question ‘Do you fully agree, rather agree, rather disagree, or strongly disagree with the statement “Russia is a European country”?’ As the chart below shows, only 36% ‘rather’ or ‘fully’ agree, whereas 58% ‘rather’ or ‘fully’ disagree. This provides little succour to those who hope that the young generation will turn Russia in a European direction.

Finally, young Russians consider it o.k. to use connections to find employment or ‘get things done’, but are strongly opposed to homosexuality (which rates even lower than bribe taking). 80% of them consider that it would be a ‘bad’ thing if a homosexual individual or couple moved into their neighbourhood. On the other hand, heterosexual activity before marriage doesn’t seem to bother them.

As one might expect, in general the survey finds that rich, highly educated, people in large cities are more liberal than poor, less well educated, people in rural areas and small towns. The real divide, however, is between Moscow and the rest. You can see this in the chart below which shows respondents’ answers to the question ‘Which side do you think is primarily interested in this confrontation between Europe and Russia?’ Across the country, about 50% think that it’s the United States, around 20% blame Europe, and 15% blame NATO, whereas 15% say it’s the Russian leadership and 2% the Russian military leadership. But in Moscow, things are different.  In Moscow, a massive 35% say that it’s the Russian leadership which is responsible for East-West conflict, while another 8% accuse the Russian military leadership. 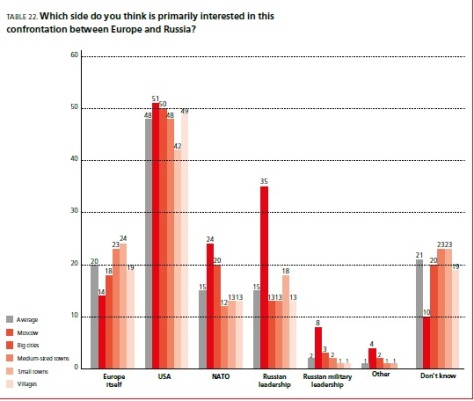 In short, Moscow is a world of its own. That raises the question of why that is. If it’s simply because Moscow is richer, then as the rest of the country develops economically we should expect its attitudes to converge with those of Moscow – i.e. become more liberal. But if it’s for some other, more structural, reason (perhaps the greater concentration of artistic and cultural elites in the capital), then such convergence is unlikely, and the divide between Moscow and the rest will endure and maybe even widen. In the meantime, any conclusions about Russia drawn from observations of Moscow are likely to be very wide of the mark.

9 thoughts on “Russia’s not so radical youth”