Last stop on our World Cup tour was Kaliningrad. On the way from the airport, our taxi driver told us that the city had drafted in 12,000 extra police from the rest of Russia for the tournament, and that additional OMON troops were coming in specially for the England game. In the end, perhaps because of all the security or perhaps of the general pleasant, fun mood of all the fans, I didn’t notice any signs of trouble. As one Russian told me in the bus back from the England-Blegium game, there was a lot of inaccurate scaremongering in the Western press.

My Soviet-era hotel definitely lacked the view I had in Nizhny Novgorod. The balcony from which I took this picture is not for the faint hearted, as it slopes dangerously downwards. 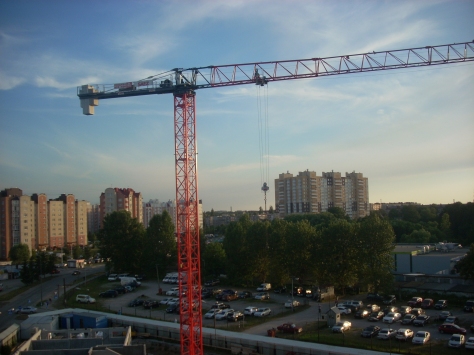 As the game wasn’t until 8pm, we began the day with some tourism. Here I am on a Soviet submarine.

After that, we visited the bunker where the German commanders sheltered during the final battle for Konigsberg in April 1945. I was struck by how quickly the Soviets took the city. Three entire armies took part in the assault, and captures Konigsberg in just three days. Hitler apparently sentenced the German commander, General Lasch, to death for his failure to resist longer, but his forces were quite clearly overwhelmed.

Next, we went to the old cathedral, in which there is a museum dedicated to the city’s most famous inhabitant, Immanuel Kant. For the philosophers among you, here’s a picture of his tomb, on the northeastern wall of the Cathedral. 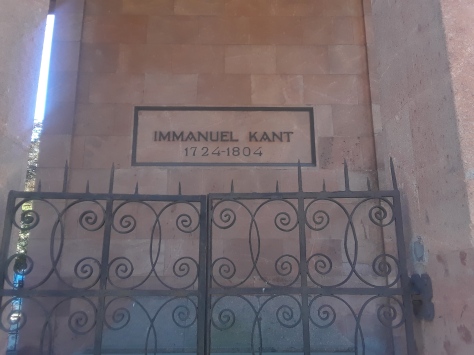 Finally, we went to the game. It was a bit of a disappointment, as both England and Belgium played their B teams, and all the best players were rested. It wasn’t desperately exciting, but had its moments and was a thriller compared with the dreadful Denmark v France. Sadly, England lost, but the pundits say that’s not a bad thing as it puts England on an easier path to the final than a victory would have done.

The Russian sitting next to me at the match kept telling me that Belgium would win the cup. One of my sons has also been telling me this sincebefore the tournament started. We shall see.

Today was a busy day in Moscow for us. Our first stop was Red Square, where we tried to get into Lenin’s mausoleum. However, the queue was huge and moving very slowly, so after a short while we gave up. Nearby Manezh Square looked like it had been invaded by Danes. 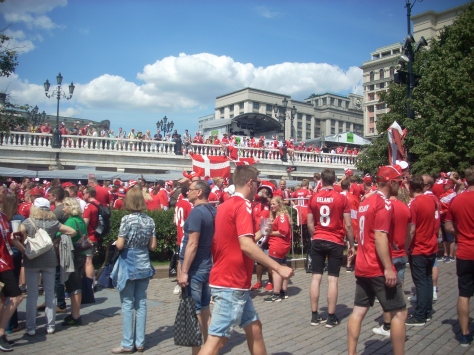 The highlight of the day was to be the evening football match, so to fill time in the absence of Lenin, we went to the Cosmonautics museum at VDNKh, which I found mildly interesting. Then lunch, after which we returned to our hotel to get the match tickets. I didn’t know that Russia had a Hockey Hall of Fame, but it turns out that it does, and as it was right next to our hotel, we popped into it for a few minutes. Here’s a picture of the hockey jersey of a certain ‘Putin, V.V.’. 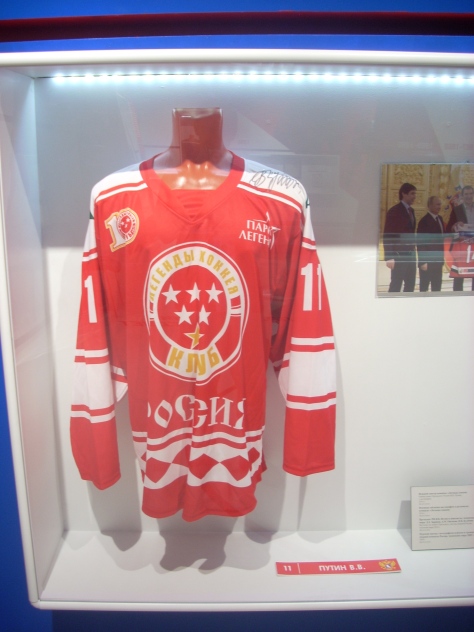 And then there was the game: Denmark v. France. What a disappointment. The large number of Danish fans provided a colourful atmosphere in the Luzhniki stadium, but before long they weren’t making a lot of noise – not because their team was losing, but simply because the game was decidedly dull. The longer it went on, the clearer it became that both teams, but particularly Denmark, were very happy with 0-0. In the last 30 minutes or so, whenever the Danes got the ball and looked set to attack, they stopped, paused, and then passed the ball sidewards or backwards. It was one of the most negative displays of football I’ve seen. It ended 0-0, satisfying the players, but leaving those watching rather dissatisfied.

Tomorrow we head off to Kaliningrad. I’ll provide an update after the England-Belgium game on the 28th.

A great but exhausting day in Nizhny Novgorod. The city seems to have two halves – an old one on one side of the river, and a newer Soviet one on the other side. Our hotel is on the top of a hill overlooking the newer part of town and the football stadium. The view from my room is superb. The downside is that it’s over 30 degrees Celsius, my room doesn’t have air conditioning, and there was loud music blaring from somewhere outside till about 3 am, so I didn’t get a lot of sleep.

In the morning, we visited the Nizhny Novgorod Kremlin, and then went to the Beeline store to sort out the mobile phone problem. The girl in the store said that this wasn’t the first time this had happened to people. The only solution was to buy a new SIM card. Frankly, this was a ripoff, but what to do? Things are at least now working. I hope they stay that way.

And then there was the game – and what a game!! 6-1 victory to England. Here’s Harry Kane preparing for one of his penalties:

I thought that the stadium was excellent. We were well shaded and there was an occasional breeze, so despite the extreme heat we were actually very comfortable. Everything was very well organized, with free buses taking us there back and good control of the crowds. I think that getting away from the stadium was probably the quickest I’ve ever experienced at a football game, even though there was a crowd of 43,000. In general, I think those responsible managed things very smoothly. In addition, there was a very positive atmosphere in the stadium with supporters of both sides and many neutrals all mixed in together but getting along well. In short,a successful event.

Tomorrow we head back to Moscow where on Tuesday we’ll be seeing France v Denmark. In the meantime, let’s hope for a cooler, quieter night tonight!

I’ve just arrived in Nizhny Novgorod after a couple of days in Moscow. So, here is the good and bad of my initial impressions of World Cup 2018

On the plus side, there’s a really positive atmosphere here. The touristy bits of downtown Moscow were the most crowded I’ve ever seen. There’s a lot of security, but it doesn’t get too much in the way. People from all the continents of the world are intermingling, and apparently getting along together pretty well. Despite all the pre-tournament talk of violence, I haven’t felt the threatened. A drunken Russian guy caused me some mild concern at the Fan Fest when watching Croatia v. Argentina, but once we started talking, he was all best buddies.

A Panama supporter I chatted with tonight told me that he had had a great time in Sochi, where he had been to watch Panama’s first game. He then got out his camera and showed me his pictures. He seemed pretty happy. An England fan told me that this was his seventh World Cup. The one in Japan had been his favourite, but this was ‘right up there’. He said that the Russians had shown ‘great hospitality and were really friendly. He was having a ‘great time.’

All in all, apart from one crying Argentinian fan I saw at the Fan Fest, everybody seems very much to be enjoying themselves. So far, I’d say, the tournament is proving a success.

The one negative aspect of our trip has been the service of the Beeline mobile phone operator, from whom my sons and I got SIM cards. Suffice to say that we haven’t got what was promised, and have had to pay extra to not get what we should have gotten from the sart. It may just be a weird misunderstanding, but it feels a bit like we’ve been scammed. We have already had to make a couple of trips to stores to sort stuff out, and are going to have to do so again tomorrow. I wouldn’t recommend Beeline to anyone else.

Tomorrow, we see our first game – England v Panama. Should be a lot of fun.

Apologies for the lack of posts of late. I’ve been either glued to the TV watching the World Cup (I type this while watching Russia v. Egypt – currently 2-0 – no, now it’s 3-0!!) or typing a book chapter which I had promised someone I would complete by mid-June
(finished it 5 minutes ago). Tomorrow I fly off to Moscow with my two boys to watch some of the World Cup in person. We’ll be going to Nizhny Novgorod, Moscow, and Kaliningrad. I will try to do a bit of World Cup blogging while there.

If I had to recommend a single article for foreign policy decision makers to read, it would be Robert Jervis’s 1968 essay ‘Hypotheses on Misperception.’ As I’ve written before, many of the tensions between states derive from misperceptions. People misperceive others; misperceive themselves; and misperceive how they are seen by others. In his article, Jervis hypothesizes 14 misperceptions which are commonly encountered in international politics. Hypothesis number 9 is the following: ‘actors tend to see the behavior of others as more centralized, disciplined, and coordinated than it is.’ Jervis adds that, ‘Further, actors see others as more internally united than they in fact are and generally overestimate the degree to which others are following a coherent policy.’ In my opinion, this is absolutely correct, and we can see a lot of this going on in contemporary analyses of Russia.

END_OF_DOCUMENT_TOKEN_TO_BE_REPLACED

This week I had the opportunity to attend the first International Forum for the Development of Parliamentarism in Moscow. It was a fairly big show, with about 500 delegates from nearly 100 countries, of whom around 400 were members of parliament and 100 were ‘experts’ (academics and the like). Clearly, the Russians don’t do a thing like this for the sheer hell of it. The forum served a political/diplomatic purpose, namely strengthening contacts with foreign countries and winning friends. In short, it was an exercise in ‘soft power’. I had been asked to make a short 2-3 minute speech, but the session I was meant to do it in ran so much over time that I never got a chance. My own role, therefore, was very much that of observer. But in that capacity, I was able to make a few judgements about how different countries view Russia, what the prospects for Russian soft power are, and how Russia is presenting itself to the world. 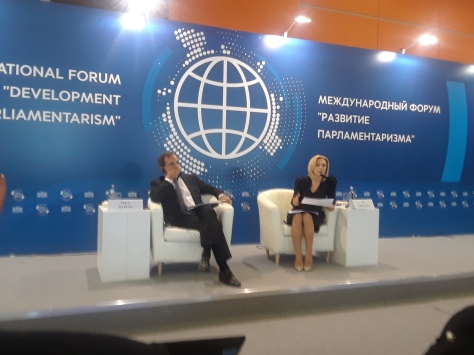 END_OF_DOCUMENT_TOKEN_TO_BE_REPLACED

I took part in the Russian TV talk show ’60 Minutes’ yesterday. I speak at about the 29 and 53 minute marks.