Russophobia is a manipulative defensive line, often used by Russian propaganda to reduce any criticism of the Russian state to an irrational intolerance towards the Russian people. (Euromaidan Press).

‘[Russophobia] is a powerful weapon in the current Kremlin’s rhetorical arsenal – deployed mainly to obscure criticism of Vladimir Putin’s regime by smearing, stigmatizing, and discrediting the messenger’ (Brian Whitmore, RFE/RL).

‘Russophobia is a label to deflect criticism from the Kremlin.’ (Hannes Adomeit, Raamop Rusland).

I could find more, but I’m sure you get the point. There’s no such thing as Russophobia. It’s just an invention of the Kremlin. As Brian Whitmore notes, ‘Moscow has attempted to portray valid critiques of things Russia’s rulers are doing – things that many reasonable people can easily find objectionable – as chauvinistic assaults on all Russians.’ The idea that quite often criticisms of Russia are indeed ‘chauvinistic assaults on all Russians’ is thus dismissed as a fantasy.

I wonder, then, what Whitmore would have to say about Mike Luckovich, the award winning cartoonist of the Atlanta Journal-Constitution. Luckovich has received not just one, but two Pulitzer prizes, and in 2005 was winner of the National Cartoonists Society’s top award, the Reuben. Today, he produced this gem. It takes the breath away: 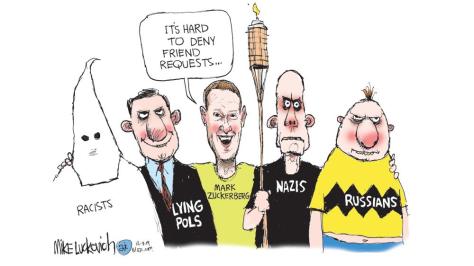 ‘Russophobia is a label to deflect criticism from the Kremlin’? Really???

12 thoughts on “No such thing as Russophobia”