Russian ‘information warfare’ is back in the headlines today, with Postmedia publishing a typically over-the-top piece by Matthew Fisher entitled ‘Russia sharpens information weapon’. What prompts this story? According to a Latvian colonel, somebody somewhere on the internet (we are not told who) wrote a derogatory comment about Canadian defence minister Harjit Sajjan wearing a turban. Of course, nobody writes racist nonsense on the internet without first receiving directions from the Kremlin, so this is clear evidence that Moscow is ‘sharpening’ its information weapons in order to discredit the deployment of Canadian troops to Latvia (though what is so ‘sharp’ about this,  I cannot see). Fisher complains that in a recent report, the ‘pro-Kremlin website’ Vestvi.lv, which is directed at Russian speakers in the Baltics, ‘grossly exaggerated what NATO was doing.’ Gross exaggeration – we can’t have that, can we, Matthew?

Meanwhile, a group of ‘security experts’ from 27 countries are meeting today in Prague for a conference to discuss the threat posed by Russia to democratic elections in the West. Among other things, the delegates will discuss a report issued on Thursday by the Kremlin Watch program of the European Values think-tank entitled ’35 measures in 15 steps for enhancing the resilience of the democratic electoral process’.  The report outlines various ways that Moscow is allegedly interfering in Western elections, as summarized in this diagram: 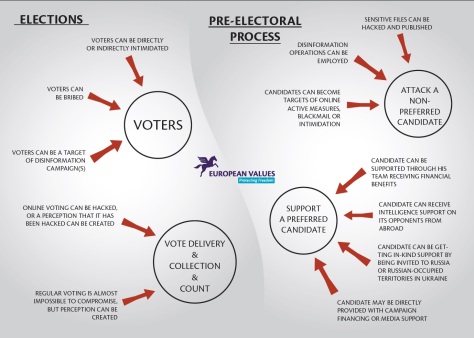 Let us take a look at this in more detail.

The report starts by claiming that, ‘In recent years, we have seen clear efforts by the Russian Federation and its proxies to influence selected elections and referendums where the Kremlin had a preferred candidate (D. Trump, M. Le Pen) or option (“Leave” in Brexit referendum, “No” in the Dutch 2016 referendum on the Association Agreement of Ukraine with the EU)’. This is not a good start. The ‘efforts’ to ‘influence elections’ are far from ‘clear’ – in fact, if they do exist, they are deliberately opaque and hard to prove. In the case of Trump, the matter is the subject of an ongoing official investigation, which has yet to reveal any firm proof, the dossier issued by the Director of National Intelligence being notably devoid of any supporting evidence. As for Brexit, even a committee of the British House of Commons has admitted in a recent report that, ‘the committee has no direct evidence’ of Russian interference in the referendum. And the only story I’ve seen which claimed that Russians played a role in the Dutch referendum actually referred to just a handful of Russian-born activists who have been living in the Netherlands for many years and as such were just participating in the normal democratic process. The same story admitted that, ‘No one has yet to come up with concrete evidence that the Russian state, rather than individual Russians, is working to skew the election’ then about to take place in the Netherlands.

In short, this entire report is founded on false premises.

Regardless, the authors proceed to tell us exactly how Moscow is undermining democracy. In many cases, the report fails to provide any examples to show that Russia has intervened in Western countries in that specific way – for instance, ‘voters can be bribed’, ‘voters can be intimidated’, ‘online voting … can be hacked’, ‘a candidate can receive intelligence support on its opponents from abroad’, etc. The lack of examples can be taken as evidence that none of this has happened.

In other cases, a little more information is provided to back up the allegations, but it isn’t very substantial or convincing. For instance, the report claims that,

Russian intelligence agencies target and buy journalists covering policy issues in relevant and even not so relevant national medias. They can even insert their own fake journalists inside media houses to disseminate the Kremlin views to a wider audience. This happened recently in Sweden, where a person with the fake name ‘Egor Putilov’ inserted inside a media house and produced anti-immigrant troll texts as proper journalism.

It sounds convincing until you discover that ‘Putilov’ wasn’t a journalist but an official in the nationalist Swedish Democrats Party who was suspended after he was found to have bought a house from a Russian businessman who is alleged to have criminal connections. But having possibly dodgy business dealings with Russians isn’t the same as being an agent of the Russian intelligence services, and, as far as I can tell from what has been published on the matter, no evidence has ever been produced to suggest that Putilov actually is such an agent. At any rate, influencing a minor official in a small political party is hardly the same as influencing a senior journalist in a major media outlet. Perhaps Russian intelligence agencies have targeted and bought such journalists, but this report fails to mention who they are.

Next, the report states that, ‘Candidates, their teams, and their relatives can become targets of online active measures, blackmail or intimidation.’ To back this up, it adds that this could be done by:

Promoting pro-Kremlin candidates who have been compromised/threatened/blackmailed/bribed to switch their policies pro-Kremlin already decades ago. The Russian intelligence services can work with (manipulate, persuade, softsoap etc) their target for years and finally recruit the already before the person becomes a relevant candidate for national or local elections. These seemingly independent politicians, but actually long-term pro-kremlin agents of influence inside our electoral systems are damaging and sabotaging our parliamentary decision making as well as public debate.

Theoretically, this is possible, but who are these alleged sleeper agents? And what is the evidence that they are ‘damaging and sabotaging parliamentary decision making as well as public debate’? I suspect that this is hinting at the allegations in the discredited dossier drawn up by ex-MI6 agent Christopher Steele that the Russian secret services have kompromat concerning Donald Trump. Maybe there are some Russian sleeper agents out there working their way up the political greasy pole, but without names, without even the slightest hint of the possibility of some actual evidence, this is pure speculation and completely without value.

The report also claims that ‘In countries where the local environment allows it, a candidate may be directly provided with campaign financing or media support,’ and gives the following example:

Russian-backed disinformation outlets support and help build support for their own extremist candidates. Russia secretly finances and creates audiences for fake media and prokremlin extremists to create more acceptance for their favourite candidate and even mobilize targeted citizens to campaign for their candidate. This has been happening for example in Finland, where known neo-nazi hate site MV-lehti and network of similar sites have for months aggressively promoted a suspected criminal Ilja Janitskin as the president of Finland.

MV-Lehti is often described as being financed by Russia, and more specifically by the FSB. But is it? One shouldn’t imagine that every crackpot neo-Nazi who happens also to be pro-Russian is on the FSB’s payroll. Again, we need some evidence, and once again we aren’t given any.

Finally, the report makes what is my favourite claim about how Russia undermines democracy in the West, namely that, ‘A candidate can be getting in-kind support by being invited to Russia or Russian-occupied territories in Ukraine’. Oh the joy! Spend years spreading Kremlin propaganda, and what do you get? An all-expenses-paid holiday on some charming tropical island? No, something even better: a trip to Lugansk! Those Russians sure know how to reward their servants.

Evidence. I’ve used that word a lot in this post, but with good reason.  Evidence – or rather the lack of it – is the real problem with this report and Matthew Fisher’s article. They consist entirely of unsubstantiated allegations.  Perhaps it’s all true – perhaps Moscow is behind the story about Harjit Sajjan’s turban, perhaps it does have active agents in the Western media and sleeper agents biding their time until they become political leaders. Perhaps the Kremlin is financing neo-Nazi websites, however stupid that might be. But without evidence to support these claims, believing them is an act of faith, and nothing more.

11 thoughts on “Turbans and propaganda”