The term ‘Russophobia’ gets bandied about a lot at the moment. This annoys the hell of out people who get criticized as Russophobes. ‘Russophobia’, they tell us, is a smear used by the Kremlin and its proxies to smear critics of the ‘regime’. As such, it ought to be eliminated from public discourse. The online outlet Meduza, for instance, recently stated that the word ‘Russophobia’ has Stalinist roots and ‘is actively used by the Russian authorities for propaganda objectives’. According to Meduza, it would be better to use the term ‘anti-Russian’, as it fits with the phrase ‘anti-American’, which generally has political but not racial overtones.

Meduza nevertheless admits that Russophobia isn’t entirely fictional and that you can spot examples by uses of markers like ‘always’, ‘unchangeably’, ‘centuries’, and so on. Meduza’s point, therefore, is not so much to deny Russophobia as to make a politically-founded linguistic argument about the correct choice of word to describe it. By contrast, Brian Whitmore (who I’ve yet to hear say anything nice about Russia) takes a much harder line. Linking the use of the word ‘Russophobia’ with  anti-Semitism, he remarks that:

Russophobia is not just a smear the Kremlin aims at anybody who has the temerity to criticize Vladimir Putin’s autocratic regime. The use of the term is part of a carefully calculated disinformation strategy aimed at stigmatizing any and all critiques of the government as chauvinistic assaults on all Russians. It’s effectively a systematic attempt to smear and discredit Kremlin critics as racists.

‘Rascist’ is probably the wrong word. As Sean Guillory notes, ‘Russians are not a race’. Guillory concedes that the idea of Russophobia can be used by the Russian government to discredit critics. At the same time, he continues, ‘Russophobia does employ racist language and concepts’. It endows not just the Russian state but the entire Russian nation with negative characteristics. Does Russophobia of this sort exist? Too damn right it does. Take the following example:

In an interview for the Estonian think tank, the International Centre for Defence and Security, Keir Giles of Chatham House laid out 10 principles for dealing with Russia, including this gem:

‘8. Do not hope to appeal to Russia’s better nature. It doesn’t have one.’

Giles can’t defend himself by claiming that he’s just talking about the current Russian government, for the basic principle of his book Moscow Rules, from which these principles are drawn, is that there is a sort of ‘eternal Russia’ which continues over the centuries regardless of regime or individual ruler. It’s not Putin who doesn’t have a better nature, Giles is telling us, it’s ‘Russia.’

The fact that this analysis is coming out of Britain’s most prestigious think tank is more than a little disturbing. It’s Russophobia pure and simple – a negative stereotype of an entire nation taking the place of reasoned discussion of the actual roots of current East-West tensions. It deserves to be called out.

Does labelling people Russophobes discredit them, as Meduza and Whitmore complain? Yes, of course it does. For sure, many critics of the Kremlin make perfectly valid criticisms, are far from Russophobes, and don’t deserve to be labelled as such. Others, though quite clearly do. If that discredits them, all the better.

Here goes with another long book review (of what is actually quite a short work, which I read in a single afternoon). But bear with it. As so often, the book, while not revealing much of value about Russia, does provide valuable insight into how Russia is viewed by its Western critics.

Keir Giles of Chatham House in the United Kingdom wants to enlighten us about Russia, and has written a book, Moscow Rules, to that end. A clue to his thesis lies in the subtitle: What Drives Russia to Confront the West. According to Giles, the problem in East-West relations is that Russia is ‘confronting’ the West. Why? Because, basically, Russians aren’t like us, they’re ‘un-European’. They’re innately ‘expansionist’, distrustful of the West, untruthful, and authoritarian. The West should rid of itself of any delusions that it can live in peace with Russia, and instead focus on deterrence and containment.

Giles notes that Westerners have been surprised by Russian behaviour under Vladimir Putin. But they shouldn’t be. One can see a ‘remarkable consistency of specific features of Russian life over time,’ meaning that Russia today is just an extension of Russia in the past. The problem, in short, isn’t Vladimir Putin, it’s what one might call ‘eternal Russia’. As Giles says, ‘throughout the centuries, Russia’s leaders and population have displayed patterns of thought and action and habit that are both internally consistent and consistently alien to those of the West.’ Russia, claims Giles, is ‘a culture apart’, and ‘Russia is not, and never has been, part of the West, and thus does not share its assumptions, goals, and values.’ 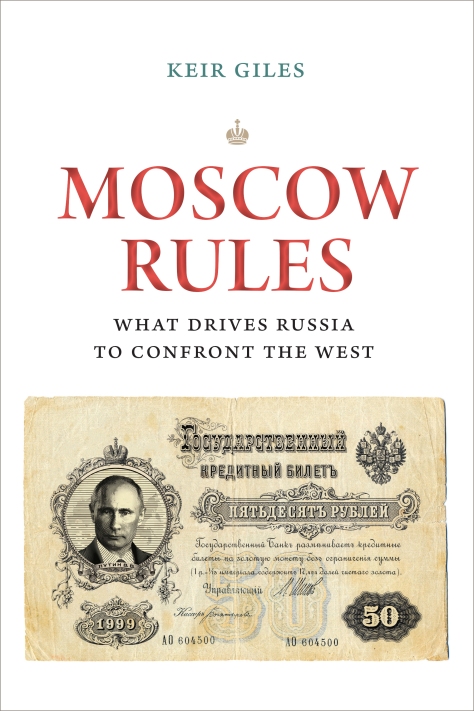 So what distinguishes Russia from the West?