In my last post I wrote of the difference between popular and academic history. Two recently published books about Ukraine provide an opportunity to explore this distinction further. These are Gordon Hahn’s Ukraine over the Edge: Russia, the West, and the New Cold War, and Marci Shore’s Ukrainian Night: An Intimate History of Revolution. The former is a densely packed analysis of the causes and consequences of the revolution in Ukraine in 2014 and the subsequent civil war. The latter is a more impressionistic, jounalistic examination of what one might term the spirit of the revolution. Hahn gives a long, detailed and balanced account, replete with context and theory. Shore gives a short, superficial, but light and personal version of some of the same events. Because of this, Shore is likely to get many more readers, but if you’re prepared to put in the effort, Hahn will give you a much deeper understanding of what went wrong in Ukraine. Academic history is harder going than popular history, but ultimately more rewarding. 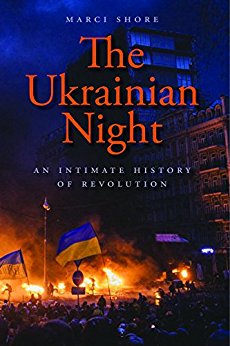 Hahn describes the causes of the conflict in Ukraine as twofold: ‘geopolitical-civilizational and Ukrainian domestic’. He spends a considerable amount of time examining both. In the case of the first cause, this involves a long diversion into theories of geopolitics from Halford Mackinder through to Alexander Panarin and Alexander Dugin. Mackinderites (notably Brzezinski), he claims, have had a significant impact on US foreign policy and have pushed America and its NATO allies to pursue an expansionist agenda at Russia’s expense. Russia, he says, has responded by turning towards a Eurasianist mindset which sees Russia and the West as distinct civilizations. Ukraine has become the battleground for the resulting geopolitical conflict.

I have some reservations about this. I’m not sure geopolitical theory is that widely held in the West, or that Western politicians even fully understand what they are doing, let alone deliberately follow theoretical strategic ideas. And Hahn admits that there is little evidence that Eurasianist thinking has influenced Russian President Vladimir Putin. I think that one could more simply say that Russia and the West have both been seeking to expand their power and that Ukraine has been caught in the middle . Hahn’s insistence on putting Ukrainian events in their broader international context is nevertheless appropriate, and he makes a strong case for his argument that NATO expansion was a ‘grave mistake’, which strengthened anti-Western sentiment in Russia both in the general population and among policy makers.

Turning to the divisions within Ukrainian society, Hahn shows that these are historical, geographic, cultural (including religious and linguistic), and economic. Hahn outlines all of these in great detail, as readers get a crash course in Ukrainian history (as they then do in the history of Russia-Western relations following the collapse of the Soviet Union). While to a certain extent this is necessary, as someone who already knew much of this material, I did occasionally wish that he would hurry along a little to recent events.

Before doing so, however, Hahn takes readers on a long diversion into the theory and practice of democracy promotion and revolution. He outlines the dangers of ‘revolutionism’ – ‘the almost blind faith in the positive, democratizing nature of revolutions.’ Revolutions in countries with already weak institutions and inter-communal divisions often end up threatening those countries’ territorial integrity, producing separatism and civil war. This was something those promoting regime change in Ukraine should have been aware of, but chose to ignore, Hahn argues. All this set the scene for a perfect storm when NATO and the EU’s geopolitical ambitious led those organization to encourage ‘democracy promotion’ in Ukraine. In doing so, the West, says Hahn, ‘failed to grasp that Ukraine was a divided entity and that forcing the civilizational choice on it was likely to break the country apart.’

Eventually, this leads Hahn onto the events in Kiev known as ‘Maidan’, which followed President Viktor Yanukovich’s decision not to sign an association agreement with the EU. Hahn details the key moments which he thinks escalated the situation. Contrary to the revolutionaries’ claim that the police were the first to use violence in Kiev, Hahn notes that the first violent clash took place when demonstrators attacked police on 24 November 2013. Subsequently, he records, the demonstrations were rapidly taken over by ultranationalist, far-right groups, who were responsible for instigating most of the violence. This, however, had no effect on Western perceptions of Maidan, with Western officials regularly blaming the Ukrainian government for repressive behaviour. Most notably, Hahn follows Ivan Katchanovski in accusing pro-Maidan activists of being responsible for the sniper attacks in Kiev which killed around 100 people.

In the final chapters of his book, Hahn details the Russian takeover of Crimea and the beginning of the war in Donbass. The annexation of Crimea, he says, made matters in Donbass much worse, by leading anti-Maidan activists there to believe that Russia might support them if they rose up against the new regime in Kiev. Hahn therefore holds Russia in part responsible for the war in Donbass, and outlines what he thinks Russia’s involvement in that war has been. However, he is also of the view (correctly in my opinion) that the direct involvement of the Russian military was limited to two short interventions (at Ilovaisk and Debaltsevo) and that the initial uprising in Donbass was a spontaneous, locally-driven affair. He explains how following the fall of Yanukovich, far right gangs set about attacking supporters of the old regime, burning offices of the Communist Party and Party of the Regions, invading meetings of municipal and regional governments and forcing officials to resign, and attempting to seize regional government buildings across the country. The anti-Maidan movement responded to these actions by copying the methods previously used by Maidan, in what were essentially acts of self-defence. Initially, there was little support for separatism in Donbass. There was room for negotiation and agreement, Hahn argues, but instead the new government in Kiev opted for force, starting the ‘Anti-Terrorist Operation’ in April 2014. This drove the inhabitants of Donbass into the hands of the rebels, and ensured that there would be civil war. Responsibility for this, says Hahn, lies firmly with Kiev and also with its Western allies, which failed to restrain it.

There are a few minor inaccuracies in Hahn’s account (e.g. calling rebel leader Igor Bezler ‘Igor Belzer’), and some of Hahn’s analyses of events go further than I would in casting blame firmly on the Maidan side without considering also the contributions of anti-Maidan activists. But on the whole, I concur with his depiction of the causes and consequences of the revolution in Ukraine. His book is packed full of evidence. This might make it a bit of a hard slog for some, but even if they end up disagreeing with Hahn’s conclusions they will at least have something solid against which to argue.

This can’t really be said to be true of Marci Shore’s Ukrainian Night, which is much shorter but also more lacking in depth. The bulk of the book consists of Maidan supporters explaining how they felt about the revolution and subsequent events. Shore is quite clearly sympathetic to the spirit she says that they embody, but since nearly all her interlocutors support the revolution, one gets a rather lopsided view of the story. If you were to read only this book, you would come away with a very different view of Maidan than that described by Hahn – one in which, for instance, the Kiev police were responsible for instigating all the violence and far right elements were not of great importance.

Despite this, Ukrainian Night is quite a useful book in a way Marci Shore probably did not intend. For, reading all that the Maidan supporters have to say, one finds many of the complaints which Hahn makes about Maidan being confirmed.

For instance, the irresponsibility of promoting revolution without properly considering the consequences shines through many of the statements of those whom Shore speaks to. Her interviewees are highly idealistic; they truly want to build a more liberal, better future for their country, and as a result they display a naïve belief in, indeed zeal for, revolution. As novelist Taras Prochasko tells her, ‘Each generation should live through its own revolution.’ Shore gets a little carried away with this herself and describes uncritically a sort of transcendental spirit which Maidan supposedly created: Maidan was ‘another world’ where ‘the barriers which normally existed between people dissolved,’ ‘a world which was well-kept and unsoiled, a world where responsibility had developed organically.’ But absent from all this is any understanding of the practical difficulties of building a liberal order, let alone of the likely response of those who disagreed with the Maidanites’ objectives and methods.

Shore’s people are nearly all well- educated liberals. She doesn’t speak to members of the far-right and we hear of the latter only through the words of the former. But these are revealing. Shore’s supposedly liberal, pro-Western friends seem remarkably unconcerned about sharing a platform with fascists and their symbols. Speaking of the slogan of the WW2 nationalist organization, the OUN, ‘Slava Ukraini, heroyam slava’, one remarks that she ‘was persuaded that no one any longer understood the slogan in its radical nationalistic context, that only the anti-imperial, anti-Soviet ethos of the words had remained.’ The fact that this wasn’t true for many Ukrainians, particularly in Donbass, seems not to have occurred to her.

But as becomes clear in Ukrainian Night, the Maidan revolutionaries really don’t care what their opponents think or feel, such is their certainty of their own correctness. Shore writes of one that, ‘Jurko did not understand those who were against the revolution.’ ‘It’s very difficult to speak to them on an intellectual level,’ sneeringly says another. A third speaks of a ‘deformation of human minds’, with the people of Donbass ‘zombified by Russia.’ ‘They’re all looking backwards’, says a fourth, contrasting this what he calls ‘normal people’. Donbass is described as a region of ‘social marginality’, ‘a mountain of social antiquity,’ and the war there as a struggle between the modern and the ‘premodern’.

In his book, Gordon Hahn speaks of ‘an oppressive atmosphere aimed at the Donbass and its people’ in post-Maidan Ukraine. One can see this among Marci Shore’s Ukrainian friends. As one couple tells her:

To these people it seems that their history, their lives, are being taken from them. Perhaps that’s so, Marci. It will seem strange to you, but we don’t feel sorry for these people at all, and we do not even want to understand them.

And there in a nutshell is why there’s a war in Ukraine.

3 thoughts on “Two books on Ukraine”