So, we’re watching the latest episode of Shadowhunters last night and when the action moves to Siberia we’re surprised to see a red flag flying. My first thought is ‘Don’t the Americans realize that Russia isn’t the Soviet Union anymore?’ And then my second thought is, ‘And, anyway, the flag’s flying back to front’. But then I look closer and see that it’s not quite the Soviet flag, as there’s a yellow circle around the hammer and sickle, which I think is meant to depict two sheaves of wheat. The only reference to such a flag I’ve been able to find is on a website called ‘incorrect depictions of the Soviet flag’. Would anybody care to tell me if there is such a flag, why the director of Shadowhunters might imagine it to be flying in modern day Siberia, and why it’s flying back to front? Is it a clever way of indicating to those in the know that the action isn’t taking place in our version of reality?  Or is it just what some people like to call an ‘epic fail’? Let know what you think. 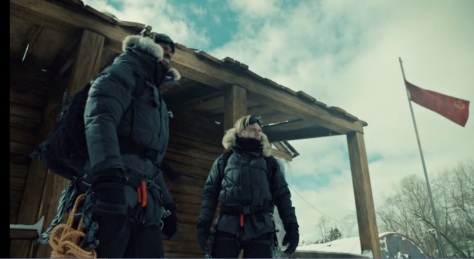