What sort of guy thinks that it is a good idea to deliberately provoke a nuclear-armed power? Answer: the sort of guy who writes for the Center for European Policy Analysis (CEPA), a think-tank which claims that its purpose is to ‘bring about positive change in Central-East Europe and Russia by strengthening NATO’s frontline, better understanding the Kremlin’s strategic aims, promoting greater solidarity within the EU, and bolstering Atlanticism.’ CEPA ‘experts’ include the Economist’s Edward Lucas and the Power Vertical podcast’s Brian Whitmore. In short, it’s the kind of institution you go to if you think that Western politicians and journalists are being far too soft on the Russians. In line with its mission, every now and again CEPA brings out a report about the evils of Russian aggression and disinformation. Its latest, entitled Chaos as a Strategy: Putin’s ‘Promethean’ Gamble is a doozy. 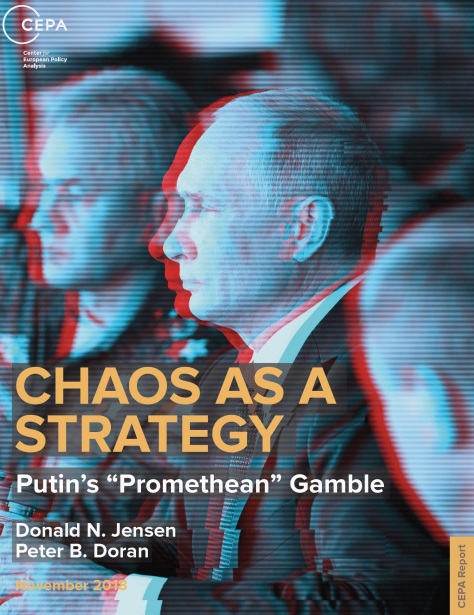 The authors of Chaos as a Strategy are CEPA president and CEO Peter Doran, and Senior Fellow and former diplomat Donald Jensen. Their report is a classic example of what I call ‘conceptual flipping’ – i.e. taking a concept created by one’s opponent and then flipping it around. As Ofer Fridman shows in his recent book, Russian thinkers such as Aleksandr Dugin and Igor Panarin were accusing the West of waging information warfare against Russia for years before Westerners took the idea, flipped it around (on the basis of the ‘Gerasimov doctrine’) and began to accuse Russia of the same. Similarly, for some time now, Russians (most notably Sergei Glazyev) have been accusing the West of deliberately sowing chaos around the world in order to weaken potential rivals and secure American hegemony. Glazyev calls this ‘world chaotic warfare’. Doran and Jensen now flip this over: Russia, they say, is using a ‘strategy of chaos’ against the West. Specifically,

In recent years, Russian leaders and strategists have developed a set of methods aimed at spreading disorder beyond their borders for strategic effect. Their goal is to create an environment in which the side that copes best with chaos wins. The premise is Huntingtonian: that Russia can endure in a clash of civilizations by splintering its opponents’ alliances with each other, dividing them internally, and undermining their political systems.

Doran and Jensen call this strategy of chaos ‘Promethean’, a term used by Polish leader Josef Pilsudski to describe the policy adopted by Poland toward Russia in the inter-war period. Whereas Glazyev’s ‘world chaotic war’ is primarily economic in nature, Doran and Jensen’s ‘Prometheanism’ is centered around disinformation and propaganda, these being seen as the primary tools used by the Kremlin to sow chaos in the West. Despite its claims to be revealing something novel, Chaos as a Strategy therefore rapidly disintegrates into a simple repetition of all the normal claims about Russian disinformation, hybrid warfare, the ‘Gerasimov doctrine’, and the like. Consequently, I found its analysis of Russian behaviour very unoriginal and not in the slightest interesting. It’s just one more example of analysts leaping on the information warfare bandwagon without adding anything new.

What is somewhat interesting, and perhaps a little bit scary, is the report’s recommendations. Doran and Jensen are of the view that the West has been far too reactive in the face of Russian information warfare, and believe that it ought to be taking the initiative. They recommend that the West should:

Prioritize the sequencing of the ‘carrots and sticks’ offered to the Kremlin. Sticks first. This means initially increasing the penalties imposed on Russia for continued revisionist behavior and the sowing of chaos. We can start with tougher sanctions, wider travel bans, greater restrictions on access to the global financial system, and financial snap exercises. Presently, some of these tools are used – but they are underused in most cases. This needs to change. Particularly, in the domain of information warfare, the West must hit back harder. … Our responses for now should serve the shorter-term goal of forcing Russia to place more defense and less offense. For this purpose, we should lessen our preoccupation with ‘provoking’ the Kremlin. It is hardly a basis of sound policy to prioritize Putin’s peace of mind.

Back in my youth, we used to talk about the importance of ‘confidence building measures’. The idea was that potential enemies could reduce the chance of conflict by reassuring each other that they did not have hostile intent and thereby giving one another ‘peace of mind’. But now, supposedly sane foreign policy ‘experts’ think that it’s a good idea to provoke nuclear-armed powers and that peace of mind is dangerous. What these experts seem to want is the very opposite of confidence building – the creation of paranoid foreign leaders who are continued worried about their security. This is most foolish. Fear is not a good basis for decision-making. Inciting fear in others, therefore, is not a good idea, and especially not a good idea when those others have some powerful resources at their disposal.

The whole point of provocation is that incites the provoked party to do something stupid. Doran and Jensen seem to think that this will help the West. The logic is that of a zero-sum game – if the Russians harm themselves by reacting to our provocations, the West gains. But the world doesn’t work like that. When provoked, people don’t generally back down and surrender – they strike out even harder than before. In the process the person doing the provoking finds that the problem he was trying to eliminate has become worse rather than better. Perhaps your enemy goes down, but he takes you down with him.

The problem we face at the moment is that rather than framing issues in terms of disagreements and seeking to come up with mutually acceptable ways of resolving those disagreements, too many people on both sides of the current East-West divide are framing issues in terms of threat and thus of ‘enemies’. Consequently, they devise ‘solutions’ designed to weaken the ‘enemy’ rather than resolve the underlying problems. Such solutions are not solutions at all, but risk accelerating the cycle of escalation. This report is a striking case in point.

I’ve come across some fairly irresponsible policy proposals in the past few years, but ‘let’s worry less about provoking the Kremlin’ takes irresponsibility to a new level. It reveals that for some in the West, escalating the confrontation with Russia is a deliberate choice. Russians will of course notice this, consider their fears justified, and respond accordingly. That response may not help them, but they have sharp claws, and it certainly won’t help us either. Poking the bear has become a popular pastime of late. We shouldn’t be surprised if it doesn’t end well.

11 thoughts on “Poking the bear”