I don’t normally do a book review straight after another one, but I stumbled across something in my local Chapters bookstore which just cried out for commentary. The book in question is Russia Rising: Tracking the Bear in Bible Prophecy by Mark Hitchcock, a pastor and ‘Bible prophecy expert’ from Edmond, Oklahoma. His central thesis is that Russia is in the process of assembling a huge coalition which in due course will invade Israel and so bring about the ‘end times’ predicted in the Bible. Hitchcock admits that he can’t be sure exactly when this will happen, but he says (p. 137):

Whatever view one holds of the timing of the coming Russian invasion, one thing is certain – it will happen. … The timing of Russia’s offensive may be debated, but the truth of it is not up for discussion. God has spoken. And we see signs all around us that it could be very soon. 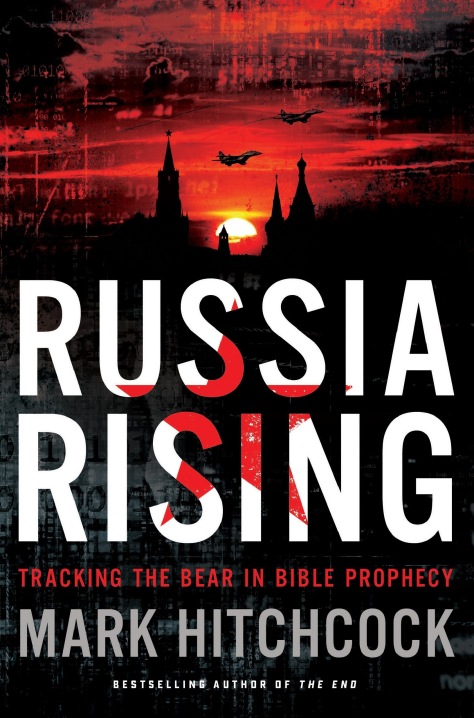 To make his case, Hitchcock starts Russia Rising with what, in the current political atmosphere, are fairly typical scare stories about Russia and President Vladimir Putin. The purpose, no doubt, is to put readers into a mood which will incline them to imagine that Russia and Putin are very capable of invading Israel. According to Hitchcock (p. 5):

Putin’s grand goals are to destroy the West by breaking up the European Union, dividing NATO, frustrating and unnerving the United States, and expanding Russia’s global influence. … We’re facing a new ‘Red Dawn’. … He [Putin] yearns to bring Eastern Europe and the Baltic States back into the Russian orbit.  … Putin is busy canvassing the globe in search of weak prey and willing allies. … The Kremlin … is arming the Taliban in Afghanistan. There are reports of Russian activity in Nicaragua. Putin’s territory grab extends even to the Arctic Circle.

Just to make sure that everybody gets the point, Hitchcock adds further frightening details, writing of (p. 10):

Putin’s unbridled ambition to bring back the Russian empire. Russia is working to bring Libya, Sudan, Turkey, and Iran under its umbrella. But the linchpin in Russia’s push into the Middle East is Syria, where the Kremlin has thrown in with the devil, supporting the diabolical tyrant Bashar al-Assad.

(As an aside, I wonder what Hitchcock imagines would happen to Christianity in Syria if Assad’s government were to fall and the rebel forces were to assume power.)

The basis of Hitchcock’s argument is a prophecy in the Old Testament, specifically in Ezekiel 38. Hitchcock tells us how the Bible identifies four kings who will emerge in the end times: the kings of the North, South, East, and West. Their aim will be to ‘dominate the world and destroy Israel.’ (p. 20) The Antichrist will be the leader of the Kingdom of the West. Russia, argues Hitchcock, is the Kingdom of the North. (p. 25)

Son of man, set thy face toward Gog, of the land of Magog, the prince of Rosh, Meshech, and Tubal … Persia, Ethiopia, and Libya will join you [Gog], with all their weapons. Gomer and all its armies will also join you, along with the armies of Beth-togarmah from the distant north, and many others. … You will come from your homeland in the distant north with your vast cavalry and your mighty army, and you will attack my people Israel.

If one takes this literally, then the question arises of where all these places are, and who will constitute this great coalition against Israel. Hitchcock cites various Bible scholars to claim that Magog refers to the land at one time occupied by the Scythians, and so covers Central Asia and some southern parts of modern Russia. Rosh, he says is the area just north of the Black Sea, and can thus be identified as Russia, especially since Rosh is said to be in the ‘distant north’ (although I did wonder why Rosh couldn’t be Ukraine, since it is more obviously just north of the Black Sea). On this basis, Hitchcock concludes (p. 41) that , ‘based on geography, Scripture indicates that Russia will be the leader of the northern coalition of the end times.’

As for the allies mentioned in Ezekiel, Persia and Libya are clear; Ethiopia, says Hitchcock, actually refers to Cush, ie modern day Sudan; and the others are located in contemporary Turkey. The Russian coalition against Israel will thus consist of Russia, the Central Asian republics, Iran, Libya, and Sudan. ‘As you can see,’ writes Hitchcock (p. 65), ‘Russia will pull together a colossal coalition in the end of days.’

This could happen soon, since (p. 67) ‘The pieces of Ezekiel’s prophecy seem to be moving into place.’ Most importantly, the great coalition predicted by Ezekiel appears to be coming together. Strangely, Hitchcock doesn’t mention the Eurasian Economic Union which could, I imagine, be used as evidence that Russia is bringing Magog (Central Asia) under its sway. He does, though, mention reports of Russian influence spreading into Libya to show how that country is moving towards membership of the coalition. Above all, he sees the war in Syria as having led to the creation of a Russian-Turkish-Iranian alliance. ‘The three-nation axis of Russia, Iran, and Turkey could quickly morph into the full coalition the prophet Ezekiel predicted,’ he says (p. 86).

That then leads to the question of whether Putin is Gog, the man who will lead the Kingdom of the North in its great act of aggression. Hitchcock isn’t certain, but he thinks it possible and that at the very least Putin is ‘Gog-esque.’ Putin is a ‘law unto himself’ (p. 90) and engaged in ‘raw expansionist aggression’ (p. 91), says Hitchcock. He concludes (p. 101) that, ‘Putin can neither be definitively identified as Gog nor conclusively ruled out’. Still (p. 104), ‘Russia’s aggressive posture … could lead in the near future to the ‘red dawn’ invasion of Israel predicted in Ezekiel.’

You might well ask, ‘Why would Russia invade Israel?’ Hitchcock proposes four motivations: 1) ‘to steal the Promised Land from Israel’; 2) ‘to seize the assets of Israel’, e.g. its ‘vast oil and gas reserves’; 3) ‘driven by anti-Semitism, the Russian-led invaders will come to slaughter the Jewish people’; and 4) ‘to scare the West and stifle the influence of the Antichrist, the king of the west.’

When will this happen? It could be any time, says Hitchcock, but he notes that Ezekiel writes that it will take place when the Jewish people have returned to Israel (which has already happened) and when Israel is secure and prosperous. The second condition is perhaps not yet present, but Israel appears to be more secure and prosperous than ever before. So, the appropriate conditions appear to be almost fulfilled. And when they are (p 140),

Russia will ignite a pivotal world war like none ever seen or imagined.

More specifically (pp. 144-7), what will happen is that the Antichrist will acquire a position of dominance in the Kingdom of the West (possibly the European Union). He will achieve what nobody else has done and bring peace to the Middle East, for which he will be feted around the world. Feeling secure, Israel will let down its guard, and at that point Russia and its allies will invade. God, however, will intervene on behalf of Israel and destroy the Russians. The Antichrist will then reign supreme until his forces also are destroyed, and Christ will then return in glory to Israel.

I’m not going to challenge Hitchcock on theological grounds, such as whether the words of Ezekiel should be considered literal truth. I’m not, after all, a theologian. But I will challenge him on the particular issue of Russia. For Hitchcock’s thesis rests not only on Scripture but also on his assessment of the current world, especially of the nature of Russia, its leader, and Russian foreign policy. If he’s wrong about that, his whole thesis falls apart, even if you accept the basic theological position. And that’s the problem: Hitchcock knows his Scripture, but he doesn’t know Russia and describes it in terms which are so extreme as to be worthless. Is Putin really seeking to ‘to destroy the West’, and ‘canvassing the globe in search of weak prey and willing allies’? I realize that these are fairly common tropes at the moment, but that doesn’t stop them from being nonsense. Certainly, Hitchcock doesn’t provide any evidence to support his claims.

Indeed on occasion, he states things about Russia which are clearly untrue. For instance, he writes (p.3) that, ‘the Kremlin is commissioning new statues of Joseph Stalin.” I checked Hitchcock’s reference for this, and it is a 2015 article in the New Statesman which mentions the unveiling of a statue to Stalin, which the article says was ‘commissioned and erected by the Russia’s Communist Party [sic].’ The Communist Party, it goes without saying, is not ‘the Kremlin.’ Hitchcock also says (p. 92) that, ‘Putin wants military parity, if not superiority, to the United States, and the gap is closing.’ This is absurd. American military expenditure is about ten times that of Russia, and just the increases in spending announced by President Trump equate to the entire Russian defence budget. The gap isn’t ‘closing’; it’s growing, and it would be utterly impossible for Russia to achieve ‘military parity’, let alone ‘superiority’.

And this leads to another problem – how exactly would Russia invade Israel? It simply lacks the expeditionary capability to do so, even in alliance with others. Russia just can’t project that much military power. And why would it do it anyway? Hitchcock’s explanations make no sense to anybody who knows even anything about Russia. The country’s relations with Israel are quite good. It has no desire to destroy Israel, and even if it coveted Israeli oil and gas deposits, the costs of seizing them by force would be far greater than any possible profit, and far greater than simply exploiting reserves within the Russian Federation. As for anti-Semitism, Putin, as far as I know, has never publicly made any anti-Semitic comments and on the contrary has a reputation as something of a philo-Semite. Maybe Gog and Magog will one day invade Israel. But it certainly won’t be contemporary Russia which leads the charge.

It is a reflection of just how far the current climate of Russophobia has developed that books like this are not just published but also widely distributed, so that one can find them on display in bookstores not just in America, but also in a place like Ottawa where Evangelical Christians of Hitchcock’s kind are quite thin on the ground. It is also indicative of how people lap up the most outrageous claims about Russia in an uncritical manner and then spread them further, generating unnecessary fears.

On a final note, I have read various articles in the past few years suggesting that Russia is trying to find allies among conservatives abroad , including Christian conservatives, by presenting itself as the home of traditional Christian values. If Russia Rising is anything to go by, common ground between Orthodox Russia and Evangelic America is going to be very hard to find.